~ We at Everwind Saint’s and Beagles are so proud of our dog's accomplishments in the show ring, but more importantly we are pleased to have them as our family pets!  They excel in both places ~ 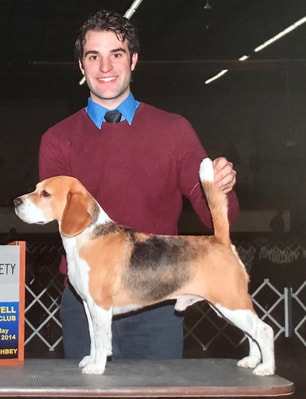 ~ Acquired his championship at 11 months by going over two top winning specials.

~ Top 10 ranked before being pulled from the show ring for four years.

~Upon his return to the show ring in 2012 he took Select over several specials earning a  Grand Championship major.

~ He was awarded back to back 5 point majors by taking the Variety at two of the Cleveland Crown Classic shows in December 2013.

~ With limited showing he earned his Grand Championship, finishing his show career with a BOV and a 5 point major over specials.

~ We are thrilled with the litters of puppies he has produced for us. He has not disappointed us with his progeny in the conformation, field trail, and the agility rings. (WE ARE VERY EXCITED!)

~ Trystan is the sire of GCHG. Everwind's Let's Tryst Again (Cassandra) , her full sister GCHB. Everwind’s Deja’ Vu (Destiny) and Ch. Everwind’s Sheza Run For Your Money (Pipi).. Cassandra, was one of top ranked 15" beagles in the country two years in a row. As of May of 2019, Destiny was the #1,  13" bitch in the country.

~ Trystan is the sire of both the Select Bitch and the Top Brood Bitch at the 2017 National Beagle Specialty.

~ He placed in Veteran and Stud Dog classes at the National and received a lot of great comments and recommendations from top breeders. 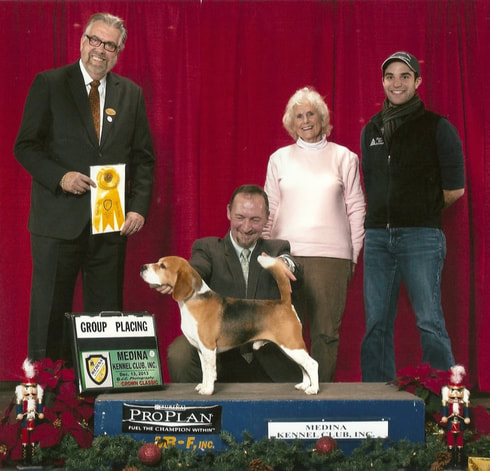 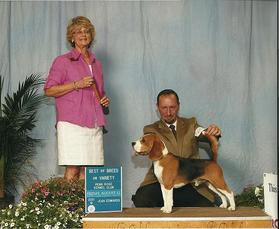 Am.GCHB. INT. CH.  Everwind’s A Chance Encounter In The Park, 15''
Aka Chance

~ Group winner and multiple group placings to his credit.

~ Continuing his winning ways at his new home in Thailand. 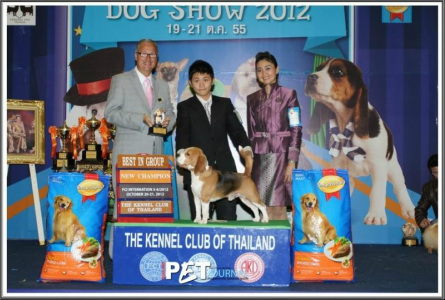 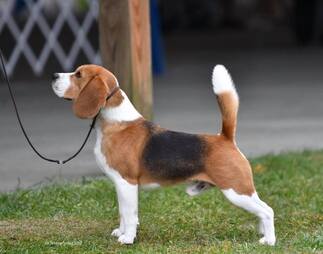 Quinten started his show career in the middle of 2020 and jumped to number 7 All Breed and Top Ten Breed by the end of the year, gaining his championship on the way.  Early in 2021 with very little showing he gained his Grand Championship and acquired his Bronze.  This young dog has already proven himself in the showring and as a sire, being the sire of the beautiful 13” CH Everwind’s Dreams Do Come True and the lovely Everwind’s Follow Your Dreams. 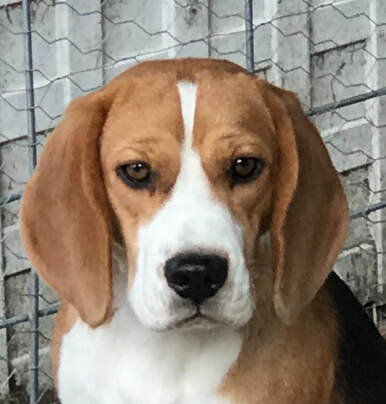 ~ CH. County Line Everybody Has a Dream X CH. Landbur Singing the Blues ​ 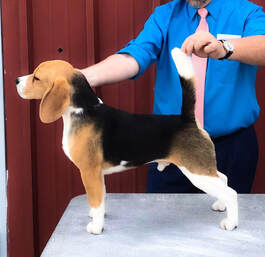 This young champion was shown very little and got his championship with four 4 point back-to-back majors.  He has been home making his mark as a incredible sire.  His personality and temperament are second to none.  He is a joy to have around.  We are thrilled to see what he is producing.  Watch for Jewel in the future (Everwind’s Crown Jewel) and Dasher (Everwind’s Dashing In Black) in the show ring in 2021. 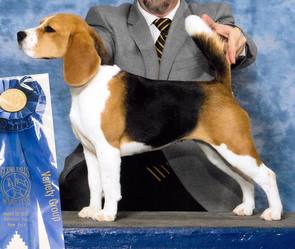 ~ First show out at 6 months old She took BOV with a 4pt major over Specials!

​~ With little opportunity to show her, Cassandra moved on and very quickly earned her Grand Championship.

~ Undefeated in her quest for Winners Bitch points as she acquired her championship, including BOS honors over specials several times. 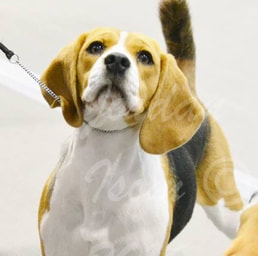 ~ GCH. Everwind's A Tryst In The Park X County Line's Icing On The Cake 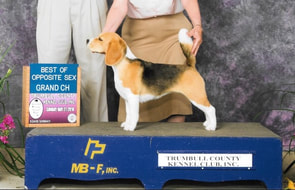 GCHS. Everwind’s Deja’ Vu, just under 6 months of age, Destiny attended her first and only puppy show and was awarded a BIS. She began the New Castle, PA shows with 17 points toward her grand championship including 3 majors – all over Specials.  When the circuit was over she had amassed another 17 points with two 5pt. majors, a 4 pt. major, and a 3 point major, not only giving her that Grand Championship title but a great start toward her Bronze medal.  This is her winning picture on the day she reached Grand Champion status.

Following those shows she attended some of the Dunkirk, NY shows where she was awarded BOV twice over specials and a BOS for two more majors and a total of 7 more points.  We are so proud of this fine young Beagle.

​~ GCH. Everwind's A Tryst In The Park X County Line's Icing On The Cake 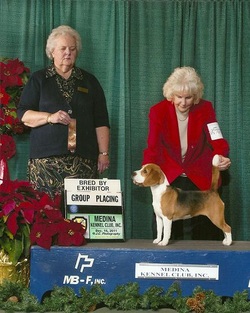 ~ Bred by exhibitor group 2 third time in the ring.

~ Earned her first Agility title with a perfect score of 100  at the 2013 Cleveland Crown Classic (NA).


~ Continuing to work toward her Open agility Title. 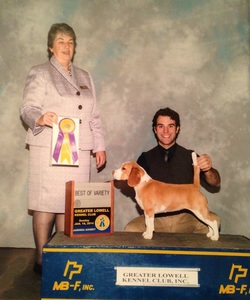 CH. County Line's Everybody Has A Dream 13"
Aka Charlie

Charlie, acquired her Championship with limited showing including BOV over specials for a 5pt major at the 2014 Cleveland Crown Classic. After taking time off to whelp her first litter (sired by GCH. Everwind's A Tryst In The Park), she took BOV over specials from the classes in Tallmadge, OH at the Cuyahoga Valley Hound Association Hound show to finish her Championship. 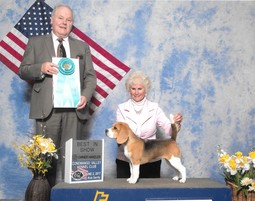 BIS CH. Everwind's Sheza Swingin' For A Star 13"
Aka Peyton 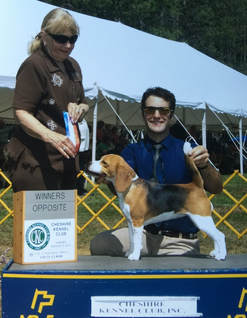 Everwind's Got A Keen Eye 15"
Aka Keena

~ On her debut in the show ring, she took WB and BOS earning her first 2pts. Continuing on, she did a repeat the next day.

~After many months off, her next two shows resulted in the first being a Reserve to a major and the second earned her a 5pt major!

~ We are very excited about this young bitch.

~ One of Coppers get that we are looking forward to showing.

~ Keena is a half sister to Cassandra on her dam's side. 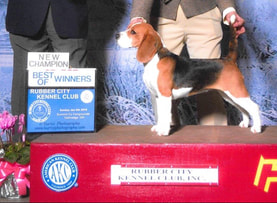 ~ With very limited showing, Tyra earned her championship with four majors by winning five and four point majors back to back. 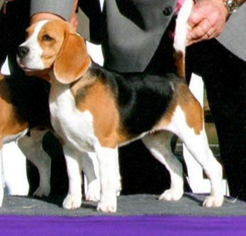 Dee-Dee, has brought some fresh blood into the Everwind breeding program. We are just delighted with what she has given us.
​
~ Ch. Barrister's Dacnin' In The Dark X GCh. Barrister's Some Like It Hot 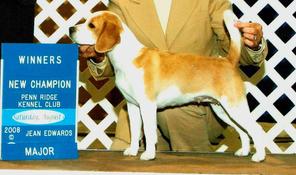 ~ Acquired her Championship with limited showing.

~ Group placing and ranked 5th at the time she was pulled from the show ring.

~ Dam of GCHB. Everwind's Tira's On My Mind NA NAJ.


​~ Litter sister to GCH. Everwind's A Tryst In The Park. 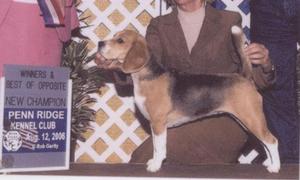 ~ Dam of Chance, Trystan, and Taylor. 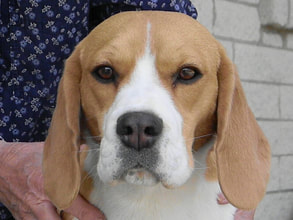 County Line's icing On The Cake 15"
Aka Kenzie

Kenzie is a lovely bitch who has not been shown due to a physical abnormality.  On top of being an excellent family dog, she has proven her worth to us as a mother by giving us, among others:

​~ Kenzie, has earned her retirement and is living the perfect life with her new family! 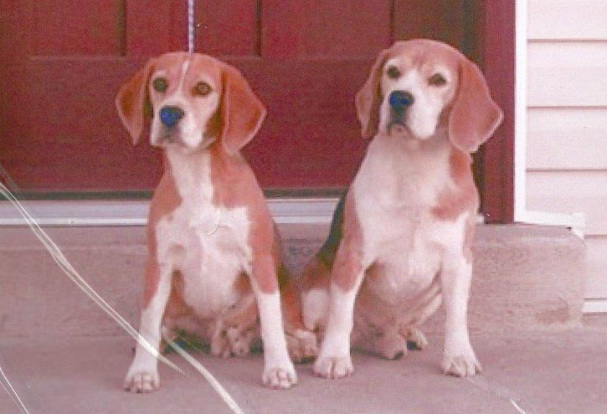 Ch. Tung's Everwind Talia and BIS BISS GCH Windkist A Walk in the Park - "Parker" are the foundation of Everwind's Beagle breeding program.