WE ARE NO LONGER BREEDING SAINT BERNARD'S 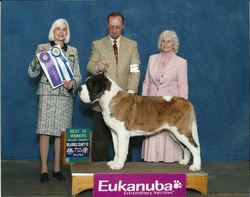 ~She has exceeded our expectations as a producer of quality offspring.